State Labor MPs have presented the results of their own community consultation on the state of Newcastle’s bus network to the operator, Keolis Downer today.

It comes after Transport Minister, Andrew Constance and Keolis Downer vowed to look into how the timetable, which was introduced in January, can be updated to better suit commuters.

According to Ms Harrison, Keolis Downer has spoken with 600 residents about the upcoming review, while the Government is yet to approach local MPs as part of their own consultation.

Mr Crakanthorp says he and his colleagues have taken the initiative to find out what changes commuters would like to see ahead of the slated review.

“This is a prime time to provide [the results] to Keolis Downer so they can actually look at it, read it, be informed and make some appropriate changes that will actually meet the needs of the commuters in Newcastle and the Hunter because at the moment they don’t and that’s why we’ve done the job for them,” he says.

Ms Harrison says they’re hoping the Government and the operator will listen to their concerns and turn them into real changes.

“I’m certainly hoping that the hundreds and hundreds of letters that we’ve received in our offices are being included in the review, I’m not sure about that and that’s why we’re taking action today,” she says.

Updated timetables are not expected to be in place until July 29. 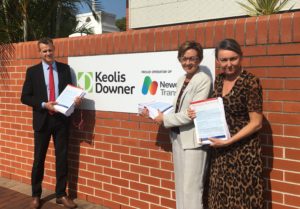