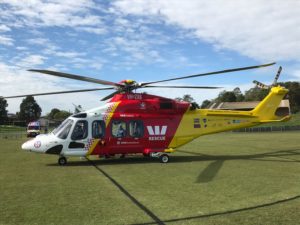 A man is lucky to be alive after suffering a serious leg injury following a motorcycle accident in the Barrington Tops on Sunday.

The man was riding dirt bikes with a group of mates through the Mount Royal National Park when he fell and hit a tree.

He suffered a compound fracture to his upper leg, prompting his mates to step in and administer first aid.

Two of the men, Luke and Brian attended to their mate, who was suffering severe blood loss.

One of the men, Kennedy, says they had to sent another member of the group on a 25 minute ride to a separate location to get mobile phone reception and call emergency services.

Given the remote location, the rider had to guide the Westpac Rescue Helicopter to the area which took another 1 hour and 20 minutes.

Kennedy says once the helicopter was able to land, a nearby farmer, Peter, drove the crew to the site.

The crew then continued to work on the patient whilst they waited for an ambulance.

Paramedics later arrived at the scene and helped the man onto the helicopter where he was flown to the John Hunter Hospital.

He was treated for serious leg injuries and is now in recovery.

Kennedy says it should act as a wake-up call to make sure we all know how to perform first aid.

“More of us should get training, and from now on we’ll all be carrying electronic emergency beacons.”

Kennedy says he will be doing his best to raise more money for the Westpac Rescue Helicopter.