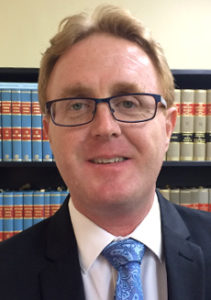 Federal Member for Newcastle, Sharon Claydon, has welcomed the appointment of Terry Betts as the newest Judge of the Federal Circuit Court at the Newcastle Registry.

The replacement comes after the former judge, Steven Middleton, was transferred to Queensland in April.

“I’m very pleased that the Attorney-General has understood the urgency of the situation and acted swiftly to appoint Judge Middleton’s replacement,” Ms Claydon said.

“I congratulate Mr Betts and wish him all the best in his new role as the Federal Circuit Court judge, having joined the Newcastle Bar in 2015.”

Mr Betts has been working at Hunter Street Chambers since 2015, with a strong focus on family law.

Newcastle was previously forced to wait several months for a replacement for a Federal Circuit Court Judge.

“Newcastle has been kept waiting as long as seven months for previous replacements. I wanted to make sure that the new Attorney-General was aware of the terrible impact these delays had had on our community, especially for the families whose lives were stuck in limbo awaiting hearings,” said Ms Claydon.

Ms Claydon will now push to have overcrowding issues at Newcastle Court addressed.