A ‘blockbuster’ announcement for Tea Gardens Police Station today, with the precinct now set for a $1 million dollar make-over.

The Premier was in town to announce that the State Government is putting up the funds to help upgrade and ‘modernise’ the station’s facilities.

“It’s in dire need of doing up…so this $1 million dollars will be extremely well spent to give the police the accommodation they deserve.”

Hundreds of locals turned out to hear the announcement which officially put to bed rumours that the station would close, following last year’s police restructure.

But Ms. Cusack says there was never any substance to those rumours.

“Those rumours could not have been more incorrect. Tea Gardens Police Station is a much valued local community facility. it’s future was never in doubt and today it gets the upgrades that it probably needed for some time.”

While there’s no time frame in place, the State Government is hoping to have the upgrades completed ASAP. 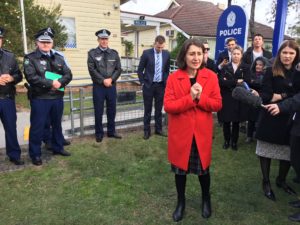 Image: Courtesy of the State Government