The State Government and Newcastle City Council have teamed up to deliver an $11 million overhaul of South Newcastle Beach, below Shortland Esplanade.

A $5 million grant from the NSW Government will see a brand new skate bowl constructed, as well as a modern kiosk and outdoor gym.

The skate-bowl-plaza combo will also be night-time friendly with the area to be lit up with electric blue lighting.

“At night the bowl will be bathed in colour through feature lighting that will prove a major attraction after dusk,” said Lord Mayor Nuatali Nelmes.

Indigenous artwork, new public amenities and stylish landscaping will also be delivered by Council over the next two years.

The announcement also means Council’s Bathers Way project, between Nobbys and Merewether is a step closer to completion.

“This component of Bathers Way and coastal revitalisation is complex and this funding from the State Government is a vital component to expediting this transformative project for our community,” said Councilor Nelmes.

The Lord Mayo is also hopeful the work will attract more people to the sport.

“The intermediate-level skate bowl and surrounding exercise facilities will cater to a diverse range of activities, promote healthy lifestyles and more economic activity, while creating a genuine tourist attraction in the construction of what I have tagged the Blue Bowl.”

This final design was made in collaboration with local skaters who gave their input on how they wanted the area upgraded. 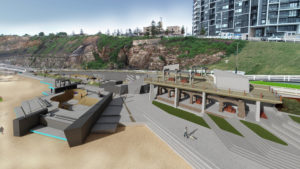 The $5 million announced today follows $5.6 million through the State Government’s 2013 Resources for Regions program to build the Bathers Way between Nobbys and Newcastle Beaches.

In recent years, Council has invested around $27 million in coastal revitalisation projects including the Bathers Way, along with significant investment in infrastructure renewal to support the delivery of this regionally significant project.