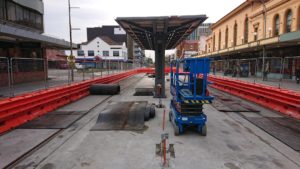 Another milestone has been reached in the construction of Newcastle’s light rail network.

The first stop has been installed just outside the Civic Theatre.

A 6.5 tonne roof canopy, which was locally manufactured, was craned into place in an operation that took more than four hours.

The stop is designed for people who are looking to reach the theatre, the university campus or Newcastle Museum.

Other stops to be installed include Newcastle Interchange, Honeysuckle, Crown Street, Market Street and Pacific Park.

Trams are expected to be tested on the line from the end of this year, and it’s expected the network will be operational by early next year.