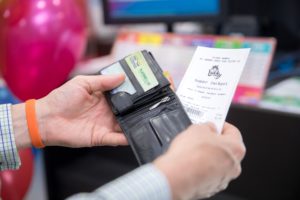 Another Hunter resident has become a lucky winner in Lotto, claiming a $100,000 prize.

The Stockton man, who wishes to remain anonymous, bought his ticket from the Stockton Newsagency and won the draw ten days ago.

The man was an unregistered player and had been using his ticket to write on.

“We got a new cat and I was writing down all the names of the cats that we’ve had, trying to think of a new name,” he says.

The man says he’ll give some of the money to his kids and go on a road trip up the coast.

Image Courtesy of The Lott.