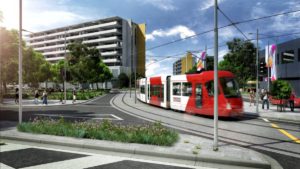 A major milestone for Newcastle’s light rail project has been reached with confirmation the first light rail vehicle is on its way.

The vehicle has been put on a ship and has left the Port of Santander in Spain.

It’s expected to arrive at the Port of Newcastle some time next month.

Revitalising Newcastle Director, Michael Cassel says this is an exciting step in the project’s progress.

“Newcastle will get to see firsthand their new vehicles on their shore which is a great thing,” he says.

Meantime, the fare prices for Newcastle’s light rail system have now been revealed.

20 cents will also be charged for those hopping on to the light rail from a bus or train.

The charges are in line with the fares set for Sydney’s light rail network which are decided by the Independent Pricing and Regulatory Tribunal.