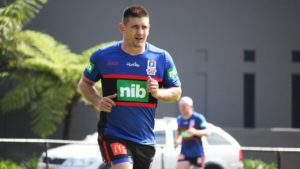 The 34-year-old has confirmed he will be hanging up his boots at the end of this season.

Lillyman was signed by Newcastle at the end of last season to mentor the young side and help the club re-build.

It comes just a week after fellow Knight and veteran of the game, Chris Heighington revealed he’ll be calling time on his career at the end of the season.