Opposition Leader Luke Foley is pledging to have one nurse to every three patients in the State’s regional hospitals should Labor be voted in at the next election.

The mandate was announced during a trip to Singleton on Tuesday where he was joined by country Labor candidate for the Upper Hunter Martin Rush.

“This expansion adds to what we have already announced – health care should not be postcode dependent. We will employ hundreds more nurses for city and country hospitals.” said Mr Foley.

NSW Labor’s policy will introduce mandated staffing levels in regional hospitals like Singleton Hospital and Muswellbrook District Hospital which will bring them into line with Sydney hospitals.

“It’s shameful that the government allows hospitals to be understaffed while putting billions of dollars into Sydney stadiums,” Mr Foley said. 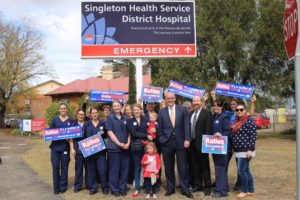