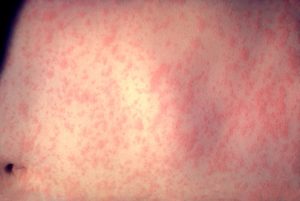 Hunter residents should be on high alert, after another case of measles was detected in the region.

NSW Health has confirmed that a teenager who was ‘incompletely vaccinated’ recently returned from Myanmar with the infection, and visited Newcastle over the New Year.

The teen drove down from Brisbane on January 5 and went to the John Hunter Hospital Emergency Department on January 6.

The onset of symptoms usually takes about 10 days, but health officials say we should keep an eye out until the end of the month.

It comes after another infectious child visited Polkolbin over the Christmas holidays.

Symptoms include a fever, sore eyes, a cough and a red, blotchy rash spreading from the head and neck to the rest of the body.

Children under 12 months old and young adults who haven’t had two doses of the vaccination are most vulnerable.

Mealses is highly contagious and can be spread through coughing or sneezing.