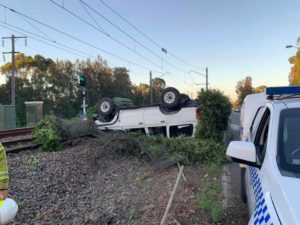 A man’s been charged after crashing his car onto a train line at Dora Creek overnight.

It’s believed the Toyota Landcruiser was travelling along Main Road at around 7:15pm, when it crashed through a fence and landed on it’s roof on the tracks.

The man then allegedly fled the scene on foot but was found by police in a nearby street shortly after.

The 36-year-old Balcolyn man reportedly returned a breath-test reading of 0.153.

He’s been charged with a raft of offences and had his licence suspended on the spot.

The vehicle blocked the Sydney-Newcastle train line for an hour.

Previous ArticleRicho on the Banking Royal CommissionNext ArticleNewcastle Airport asks for $147 million worth of upgrades.