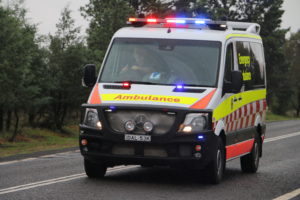 Police have now confirmed that a woman has died, after she was hit by a truck in Newcastle this morning.

Emergency services were called to the corner of King and Perkins Streets just before 9:30am, after a cyclist and a truck collided.

She was treated by paramedics, but died at the scene.

The truck driver was uninjured but has been taken to hospital for mandatory testing.

Officers are now investigating the circumstances surrounding the crash.

A report will also be prepared for the Coroner.