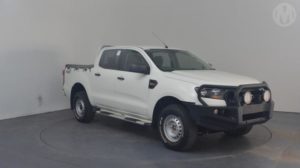 Police are re-appealing for information six months after a fatal hit and run near Singleton.

The body of 43-year-old Ian Pullen was found by the side of Carrington Street at Glenridding in the early hours of the 29th of September.

Officers are now searching for a white utility with a black front bumper bar which is thought to have been driven through the area between 4am and 5:30am that day.

Detectives have since ruled-out a woman as a suspect.

She had pulled up alongside Mr Pullen in a silver hatchback before leaving the scene.