Firefighters are beginning to gain the upper hand on a number of the more minor fires across the Hunter this evening.

The grass fire at Kahibah Street, Morisset is under control and remains at ADVICE level.

The bushfire at Bridge Street, Morisset is now under control and remains at ADVICE level.

The bushfire at Martinsville Road at Cooranbong is being controlled by firefighters and remains at ADVICE level.

The bushfire at Rusty Lane, Branxton is under control and remains at ADVICE level.

A bushfire on Bell Road at Lower Belford is under control and remains at ADVICE level.

While the Whittingham fire that was burning at an Emergency level earlier this afternoon is still under control and remains at the ADVICE warning level. 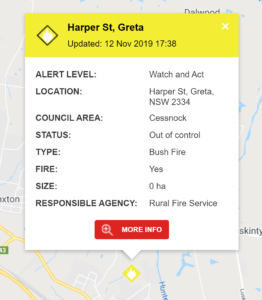 The Greta bushfire has been downgraded from Emergency to WATCH AND ACT.

However, residents are advised to continue monitoring the conditions as the blaze remains out of control. 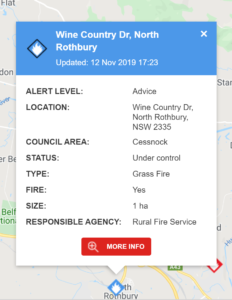 The grass fire on Wine Country Drive at North Rothbury has been downdgraded to an ADVICE level.

Firefighters are now getting the upper hand on the blaze after it scorched one hectare of land.

Despite the downgrade, residents are urged to keep an eye on the conditions.

Wine Country Drive has also been reopened in both directions. 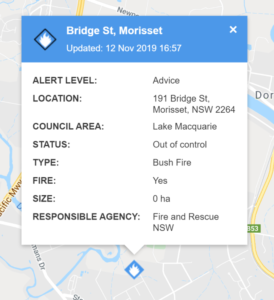 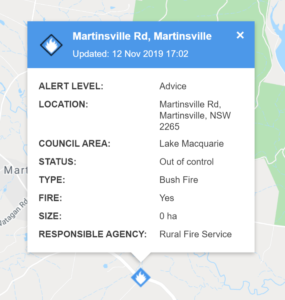 An out of control bushfire is burning near Bridge Street at Morisset.

Power has been cut to around 460 homes in North Rothbury this evening, due to bushfire activity in the area.

Ausgrid says they will restore power when it’s safe to do so.

The blaze is currently at Watch and Act, and it is being controlled.

The bushfire at Cottle Road, North Rothbury is now being controlled, and has been downgraded from Watch and Act to ADVICE. 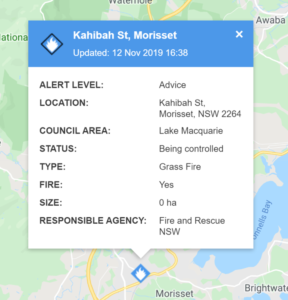 An ADVICE level fire is being controlled near Kahibah Street at Morisset. 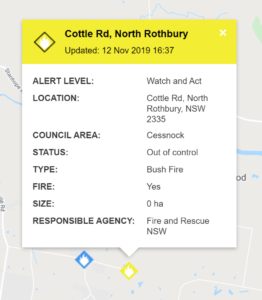 An out of control bushfire at Cottle Road, North Rothbury has been upgraded to WATCH AND ACT. 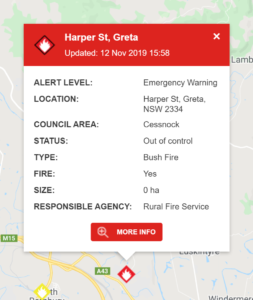 UPDATE 4pm: A fire is burning in the area of York and Harper Streets at Greta. If you are in the area it is too late to leave.

Those in the area are urged to seek shelter as the fire approaches.

An evacuation centre has been set up at the Greta Workers Sports and Recreation Club. 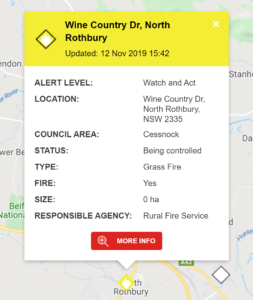 The earlier emergency level blaze at North Rothbury has been downgraded to WATCH AND ACT.

Residents are still urged to montior the conditions and stay vigilant.

Wine Country Drive between the Hunter Expressway and Tuckers Lane remains closed in both directions. 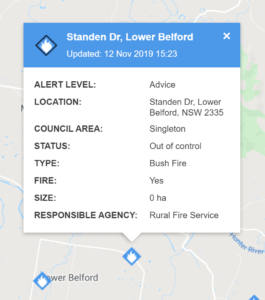 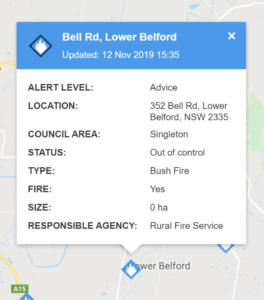 A further two Advice level bushfires have also been sparked at Lower Belford, one at Standen Drive, the other on Bell Road.

They’re currently both out of control. 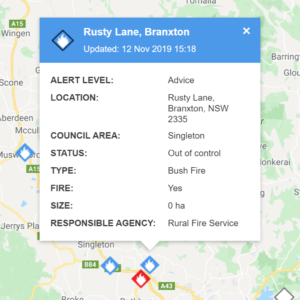 An advice level bushfire is burning on Rusty Lane at Branxton.

It’s currently out of control. 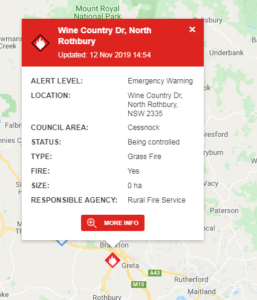 UPDATE 3pm: An EMERGENCY level fire has flared up at North Rothbury this afternoon.

It’s burning along Wine Country Drive and it is threatening homes and properties.

The RFS says it is too late to leave and all roads in and out of the area are closed, so residents should seek shelter.

Fire crews are trying to get it under control. 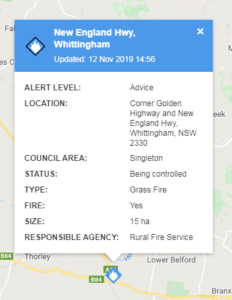 UPDATE 2:50pm: The Whittingham grass fire has now been downgraded to Advice level and it is being controlled. 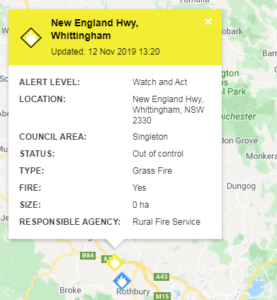 UPDATE 2:30pm: The grass fire at Whittingham has now burnt through a large area and is spreading quickly.

The RFS says if you are in the area, it is too late to leave.

The New England Highway has been closed in both directions between Range Road and the Golden Highway.

Water bombers are currently on their way to help get the blaze under control.

1:30pm: A grass fire at Whittingham has flared up to a Watch and Act level this afternoon.

Fire crews rushed to the corner of the New England Highway and the Golden Highway, to try and control the blaze.

While there’s another out of control grass fire burning quite close on Old North Road at Rothbury.

Stay up to date on the Fires Near Me app!