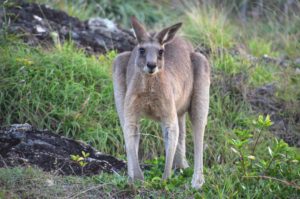 Police have launched an investigation into possible acts of cruelty against three kangaroos near Muswellbrook over the weekend.

A bushwalker in the Wollombi Park came across the kangaroos in scrubland around 8am yesterday.

It’s believed two of the animals may have been deliberately run over, while a third suffered a wound to the chest.

A crime scene has since been established.

Any witnesses or people with dashcam footage from around the area are being urged to come forward.