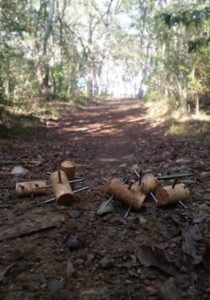 Police are appealing for information after a series of homemade spikes were found in bushland at Bolton Point yesterday.

A man was running on the Alexanders Trail in the Lake Macquarie State Conservation Park around 11:40am, where he discovered three piles of wine bottle corks pierced with nails.

It’s believed they were found hidden amongst leaves in the middle of the track.

Police were called to the scene about an hour later and began investigations.

Anyone who noticed suspicious activity in the area or has information about the spikes is urged to contact Toronto Police Station on 4088 1099 or Crime Stoppers on 1800 333 000.