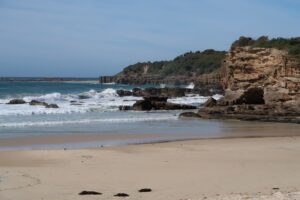 A man’s under police guard in hospital following a pursuit at Caves Beach yesterday.

Police were patrolling at Swansea Heads 2:24pm when they began pursuing a Ford Falcon which was travelling south on Lambton Road.

The car reached Caves Beach and crashed into a tree on Macquarie Grove, with the driver fleeing the scene on foot.

Officers then spotted the man on the beach, he retreated to the caves before climbing up the cliff.

However, police had him surrounded, they’ve since taken him to the John Hunter Hospital for treatment of three broken ribs.

The man’s expected to be charged this afternoon.