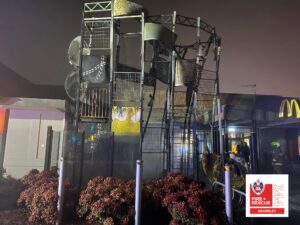 Four teenagers have been charged with allegedly lighting a fire at Cessnock McDonald’s last weekend.

The matter has been under investigation since the blaze on Sunday morning, which severely damaged the outdoor play area.

All four teenagers have been charged and will appear in Children’s Court next month.

They’ve all been granted conditional bail.