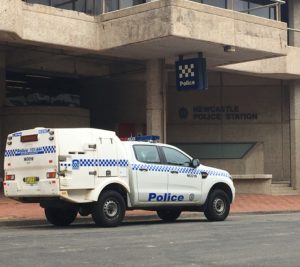 A man’s been charged after he allegedly threatened police with a hammer in Newcastle yesterday evening.

Officers were called to King Street just around 5:10pm after receiving reports of a man was acting erratically and violently.

Police approached the vehicle the man was sitting in, it’s alleged he swung the hammer at them and then exited the vehicle.

One of the officers was forced to taser the man.

He was then arrested and taken to Newcastle Police Station.

The 58-year-old has been charged several offences including resisting arrest, armed with intent to commit an offence and outstanding domestic violence matters.

Police are hoping to speak to witnesses about the incident.