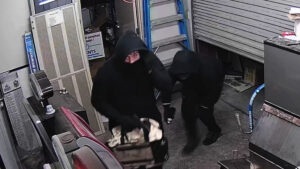 Police have released CCTV footage of an armed robbery at a Warners Bay hotel earlier this year as they continue investigations into the incident.

It’s understood the men entered the storage area of the Hillsborough Road premises around 3am on the 28th of June and threatened a staff member with firearms, before stealing his wallet and cash from the premises.

The men were both wearing face coverings, however a CCTV camera did capture part of the face of one of the offenders.

Police are appealing for assistance in identifying the men, they’re both described as around 170cm tall, with a slim to medium build.