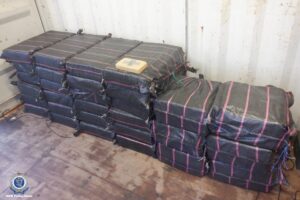 NSW Police have busted a major transnational crime syndicate with links to Lake Macquarie, after uncovering a plot to import more than 3000 kilos of cocaine into Australia.

Detectives have been working with their US counterparts since early last year, investigating the large-scale supply of drugs between Australia and North and South America.

In October, the US Navy seized 870kg of cocaine after intercepting a ship off the coast of Columbia.

They then stopped another vessel near Ecuador in April this year and seized another 900kg of the drug.

Following investigations, police replicated the items and then tracked them to a storage facility in Lake Macquarie where they arrested two men yesterday morning with the help of PolAir and the Tactical Operations Unit.

The men, aged 42 and 37, will both front Newcastle Court today.