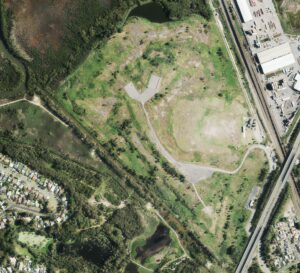 The former landfill site at Shortland will soon have remediation works getting underway.

City of Newcastle will go to tender sooner than originally thought after preliminary investigations found the scale of the work will be significantly more complex and more costly.

The Astra Street landfill site opened in 1974, taking waste from across the Hunter until it closed in 1995 – much of the debris from the Newcastle earthquake is buried there too.

Acting Director Infrastructure and Property Joanne Rigby said City of Newcastle has been working with the Environmental Protection Authority (EPA) on a plan to remediate the site and protect the nearby RAMSAR-listed Hunter Wetlands.

“City of Newcastle is committed to ensuring historic sites like Astra Street Shortland are not forgotten and we work closely with the EPA to ensure they’re adhering to modern environmental management standards,” Joanne Rigby said.

“We have completed our preliminary investigations and finalised two detailed designs, which will improve the 20-year-old capping and drainage on the 37-hectare site.”

Joanne Rigby said the detailed designs had allowed City of Newcastle to update their project estimates, with cost efficiencies and innovative methodologies to be explored where possible during the tender process.

“Following further assessments of the site, the cost of the remediation work is expected to significantly increase on initial estimates, which will need to be factored into the 2021 Budget,” Joanne Rigby said.

“City of Newcastle will invite tenders from five companies identified during an expression of interest process to carry out the construction of these enhanced environmental safeguards, with work expected to get underway next year.”

“This will include the final capping and reprofiling of the site, drainage improvements to aid in management of surface water and sediment runoff, followed by revegetation and landscaping.

“These works will allow City of Newcastle to help protect and maintain the local environment well into the future, safeguarding the water quality of surrounding wetlands and aquatic ecosystems, increasing biodiversity values and promoting long-term native vegetation growth.”