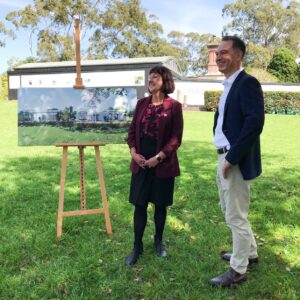 Historic Awaba House is going to be resurrected with Lake Macquarie Council lodging plans to bring life back to the building.

The first house on the grounds was originally built in 1887, but replaced in the late 1920s by the current building which was a private home before being turned into the city’s art gallery, restaurant and function centre.

Sadly in late 2019 the building was ravaged by fire.

But now plans have been lodged this week for the waterfront site in Booragul which includes fixing the facade, a new terrace area for outdoor dining, a walkway connecting to the Museum of Art and Culture yapang and new timber decking in front of the building to provide a ceremony area for weddings and other events.

A new footpath will also wind its way around the building.

Lake Macquarie Mayor Kay Fraser said she was excited to see Council take another step toward revitalising the heritage site.

“This is a landmark site that will once again become a destination for locals and visitors alike,” Cr Fraser said.

“These plans are about making the most of this prime location, creating a contemporary, vibrant and engaging place, while respecting important heritage elements of the building that could be restored,” he said.

“The community’s feedback was overwhelmingly positive during consultation last year, and we received some comments that helped us further improve and enhance the final design.”

Pending approvals, construction is expected to start next year, with project completion scheduled for mid-2023.