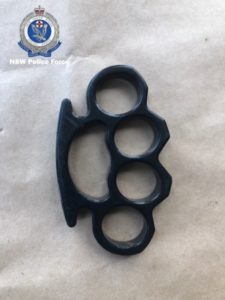 A former member of the Central Coast Bandidos bikie gang has been charged after drugs and weapons were allegedly found at a Hunter home yesterday.

Officers from Strike Force Raptor searched a Rutherford home just before 9am, where they seized two sets of knuckle dusters, methylamphetamine, MDMA and a large amount of prescription drugs.

A 36-year-old man was arrested and was charged with a raft of offences including breaching a weapons prohibition order.

He’s been refused bail and is set to front Maitland Local Court today.

Previous ArticleDanny Levi talks footy and his passion outside of the gameNext ArticleGraham Richardson gives his thought’s on Pauline Hanson & Clive Palmer!