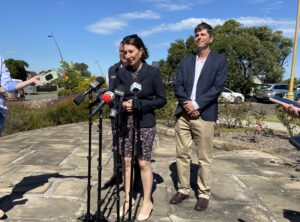 Gladys Berejiklian will resign as the Premier of NSW.

The Independent Commission Against Corruption (ICAC) revealed today it is investigating the Premier over whether or not the, now former Premier had breached public trust when she awarded several grants to several community organisations between 2012 and 2018.

There will be public hearings later this month.

Gladys Berejiklian’s statement is below:

“I have had to make an extremely difficult decision overnight, but one which I feel obliged to do because of the love and respect that I have for the people of New South Wales and the high regard which I have for the office of Premier.

I was advised late yesterday afternoon the Independent Commission Against Corruption would today release a public statement in which it will state it is investigating allegations made about me concerning matters relating to the former member for Wagga Wagga.

As it will be clear from the ICAC statement, the issues which it is investigating are historic matters that have already been the subject of numerous attacks on me by political opponents during the last 12 months.

Many of the matters were the subject of questions I was asked by the opposition while appearing before an estimates committee hearing earlier this year. I want to be very clear, in all the decisions I have ever made as a Minister or as Premier for New South Wales, my first consideration has always been the well-being and welfare of the people of this state.

As the leader of the New South Wales Government, I have expected the highest of standards of myself and my colleagues. I have made it clear on numerous occasions that if any of my ministers were the subject of allegations being investigated by an integrity agency or law-enforcement, then he or she should stand aside during the course of the investigation until their name was cleared. The reason for my stance was not to have made any presumptions as to their conduct, but rather to maintain the integrity of the public office which was held whilst an investigation was completed. That same standard must apply to me as Premier.

However, standing aside is not an option for me as the Premier of New South Wales. The people of New South Wales need certainty as to who their leader is during these challenging times of the pandemic. I cannot predict how long it will take the ICAC to complete this investigation, let alone deliver a report, in circumstances where I was first called to give evidence at a public hearing nearly 12 months ago. Therefore, it pains me to announce that I have no option but to resign the office of Premier. My resignation will take effect as soon as the New South Wales liberal party can elect a new Parliamentary leader.

In order to allow the new leader and government a fresh start, I will also resign from the New South Wales Parliament once I have consulted the electoral commission on appropriate timing for a by-election given the COVID restrictions.

That is the ICAC’s prerogative. Resigning at this time is against every instinct in my being and something which I do not want to do, I love my job, and serving the community, but I have been given no option following the statement issued.

To continue as Premier would disrupt the State Government during a time when our entire attention should be focused on the challenges confronting New South Wales. I do not want to be a distraction from what should be the focus of the state government during this pandemic, which is the well-being of our citizens.

Notwithstanding the challenges of the last few years and few months in particular, I have never felt stronger, nor more confident in my leadership. I have absolutely no regrets during my time in public life. At times we all stumble, pick ourselves up, dust ourselves off and start again stronger and wiser than before. I have done this many times, as we all have.

My only regret will be not to be able to finish the job to ensure the people of New South Wales transition to living freely with COVID.

However, I am extremely confident that whoever succeeds me will be more than capable of continuing this job. Please give them your trust and confidence. We will come through this period stronger, more resilient, and appreciating what really matters in life.

I feel strong, energised and optimistic about the future of this great state.

I want to thank the thousands of our frontline heroes who have kept us safe and kept us going during the darkest days in our state history. I owe you a debt of gratitude. Nothing that we can say or do will be able to demonstrate the significance of what you have done.

I would also like to take this opportunity to thank the Liberal Party to whom I owe my career, the people of the electorate of Willoughby who have elected me five times to be their member of Parliament, my Parliamentary colleagues for their support and hard work, my outstanding and loyal staff past and present, and all the professional public servants with whom I have worked.

I also want to thank my family and friends who have provided me with unconditional support and understanding when I have not been as present due to my responsibilities.

Most importantly I want to thank you, the people of New South Wales. When the chips were down in the past years, in particular during the drought, bushfires and then COVID, we stood alongside each other. We have grieved and supported each other during these tragedies. I hope you know that you will remain foremost in my thoughts. The courage that you display in your lives every day has inspired me every step of the way. The courage and the support you have shown me has humbled me and made me a better leader and a better person. Serving you has been the greatest privilege of my life. Please know that every day I gave it my all and worked as hard as I could to create a better future for our state and its people.

I truly believe that New South Wales is a place where every person, irrespective of their background and circumstances has the opportunity to be their best, to make a difference.

So as I address you for the final time as your Premier, please stay the course and stay safe. We will be shortly out of this lockdown and be able to get on with our lives. NSW and its people will come out of this lockdown stronger, and together we will build a future full of optimism and hope.

Finally, thank you again for giving me the honour of being your Premier.”

Another step forward for the M1 extension to Raymond Terrace

Woman charged after climbing on coal wagon near Newcastle