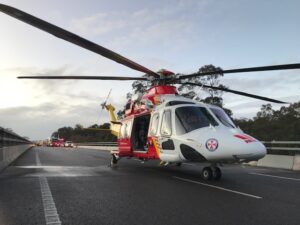 All lanes of the Hunter Expressway are now open.

The driver of the van has been airlifted to the John Hunter Hospital.

The westbound lanes and one eastbound lane of the Hunter Expressway are currently closed at Seahampton following a car and truck crash this morning.

It’s understood a van has crashed into the back of a semi-trailer, trapping the driver underneath.

Police and the Westpac Rescue Helicopter are on the scene.

Diversions for motorists are in place along the M1 Pacific Motorway and John Renshaw Drive.

One eastbound lane of the Expressway was also closed for some time but has since reopened.