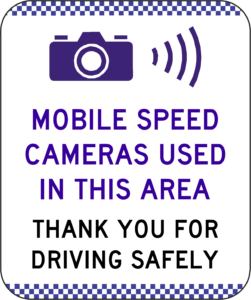 Mobile speed camera signs are back across NSW including in Newcastle and the Hunter region.

Around 1000 fixed warning signs for mobile speed cameras will be rolled out across the state this month, to remind drivers they can be caught anywhere, anytime.

The NSW Government came under fire at the end of last year when they announced the signs would disappear warning you there was a mobile speed camera ahead.

After a review by the Joint Standing Committee on Road Safety, the 1000 new signs will be installed in various locations.

Minister for Transport and Roads Andrew Constance said around permanent static signs will supplement messaging on the existing 360 variable message signs and a comprehensive advertising campaign.

“We are already seeing a change in driver behaviour, with 3.5 drivers caught by the cameras per hour of enforcement in June, compared with 5 drivers per hour in February, and we want that downward trend to continue with these new signs,” Andrew Constance said.

“Speeding is the biggest killer on our roads, with almost 50 per cent of fatalities last year caused by someone travelling at an inappropriate speed. This year that has already dropped to around 40 per cent.”

In the 2020-21 financial year, the number of deaths on NSW roads dropped by 56 compared with the last three financial year average.

“We’ve got 17 kilometres of flexible median barrier being installed on the Kamilaroi Highway from Baan Baa to Turrawan by 2023, and more than 2,000 kilometres of rumble strips going on to the Newell Highway from Tocumwal to Boggabilla by 2022.”

“Whether you are travelling far from home or just around the corner, please stick to the speed limit, drive safely to keep yourself and others safe, and remember you can be caught anywhere, anytime,” he said.