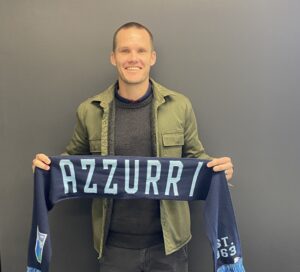 Boogaard has played 275 games in the A-League with Newcastle, the Central Coast Mariners and a stint with Adelaide as well before retiring at the end of last season.

He played 122 games with Newcastle and led them to the 2018 Grand Final.

Nigel said he wanted to sign with his local club and help them get to the championship.

“I’m a local boy, I grew up in Redhead, and currently live in the Whitebridge area, so Charlestown was one of my NPL clubs growing up when I wasn’t following the Newcastle Breakers or Newcastle United back in the day,” he said.

“Just excited to join them and give back to that community in and around where I live.”

“Recently since I’ve retired I’ve been very vocally saying I wanted to try and help out where I can in the local game and at the moment I feel like that is best placed for me still playing on the park and hopefully contribute to the success up there at Charlestown and then potentially some coaching in the future,”

“I’m still really keen to succeed and win things so why not do that for Charlestown.”

A coaching gig could be on the cards for Nigel down the track, but for now he’s more than happy playing on the field with Azzurri.

“To be honest it’s not in the forefront of my mind, I want to play for as long as I possibly can and keep on the pitch as opposed to the sidelines but as those opportunities come in the future I’ll see where that fits.”

“The club up there are very ambitious and they’ve stabilised themselves now as making finals most years so I think they’re ambitious and they want to win the competition and hopefully we can start that next year.”

There were a couple of clubs eager to sign the former Jet, but his local was always going to win the signature.

“There was a little bit of interest and its nice to feel wanted but ultimately it was about Azzurri being my little community,” he said.

Azzurri were sitting in fifth spot before the season was suspended due to the COVID-19 pandemic.