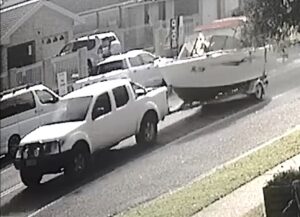 Police have now released CCTV footage as part of their inquiries into the alleged theft of a boat from Corlette last month.

The white Trailcraft vessel was stolen from outside a home on Bagnalls Beach Road just before 11am on the 18th of June.

Investigators would now like to speak with the male driver of a utility that’s pictured travelling along Salamander Way on the CCTV footage.

The vehicle is described as a white Nissan Navara, 2010-2012 model, with a black bull bar and black and yellow NSW number plates.